On Wednesday October 19th 2022, the Daily Freeman of Kingston NY published an article by William J. Kemble entitled “Woodstock residents see conflict over Saugerties glamping plan”. The article is embedded below. A short commentary follows. The text is also below.

The following morning, Thursday October 20th 2022, the editor of the Daily Freeman, Ivan Lajara, appeared on WAMC as part of the Morning Headlines series. The article about Terramor was among the items discussed. Click the link to hear the three minute piece.

Here is a .pdf of the article from October 19th
2022-10-19-Daily-Freeman-Woodstock-residents-see-conflict-over-Saugerties-glamping-plan

Commentary
While we understand that dramatic language yields column inches,*  language like “WW III” and “hardball” are hardly applicable here. In fact, the KOA/Terramor developers have been rather more open and collaborative than previous developers of this land. For example, the article was published just a couple of days after Terramor started testing neighbor’s wells during their own draw-down tests. As we pointed out in that post, these neighborhood tests are not required by law.

Further, KOA/Terramor have not yet really had a chance to play hardball. They are going through the expected process required by the Town, County, and State. That is a long process and there will be plenty of more opportunities for them to play hardball. We fully expect them to do so when it comes time to do the full SEQR process, for instance. That is their job. It is we citizens’ job to see that the Town Planning Board does its job overseeing the process and holding developers to account for every dotted “I” and crossed “T”.

Any reader of this site will know that we are no apologists for the developers, but it’s important that we keep a realistic and clear-eyed perspective on this process.

* We understand that reporting is a difficult business and that quotes are occasionally misheard, taken out of context, or mis-represented. We are assuming that the reporting and writing of this Daily Freeman article is accurate.

In case the .pdf does not display, here is the text of the article:

WOODSTOCK, N.Y. — Residents with the Citizens Against Terramor group are forecasting a conflict against Saugerties if a proposed 75-site high-end camping, or glamping, project is allowed to proceed on 77.15 acres off of state Route 212 along the town line.

Group representative Paul Thurman following a Woodstock Town Board meeting Tuesday said there is a low sense of optimism that either Woodstock or Saugerties town officials will take concerns about the proposed Terramor development seriously.

“We’re afraid we’re headed for World War III because we’ve got a lovely caretaker government and these (developers) are playing hardball,” he said. “They’re going to walk right over use and are going to affect the quality of life in this community forever.”

Thurman, who noted that he spent eight years as a Buddhist monk, said the level of concern among the business community and residents has risen tremendously because of plans that include a 4,000-square-foot restaurant and events center, 28-person staff dormitory, an Olympic-sized swimming pool, a community fire pit, wellness center, maintenance building and a dog park.

“I hate conflict but the people who are coming at us are not nice people,” he said.

During the past year, residents have complained to Saugerties Town Board members about the need to reduce speeds along state Route 212.

However, Woodstock resident Richard Buck noted that the estimated 25,000 vehicles arriving over a seven-month period is a looming nightmare for existing community centers such as the Woodstock Jewish Congregation and the Woodstock Day School. In materials provided to the board, he noted the accident rate at the intersection of Glasco Turnpike and state Route 212 is “already five times” the state average.

However, in minutes from the July 19 Saugerties Planning Board meeting, officials wrote that they considered the traffic impacts to be low. “On average the proposed use would generate 17 (morning) trips and 22 (afternoon/evening) trips,” they wrote. There is a 100 trip threshold for requiring a traffic study. There was too insignificant of a change in traffic impact to require any changes (in the plan).”

In the Saugerties town material, Terramor officials said that the site would primarily be used between May and October, follow national Dark Sky guidelines to minimize light emissions, have a “strict noise” policy for “quiet hours beginning at 10 p.m., and would have about 25% of guests use fire pits that come with the camping sites.

Saugerties Supervisor Fred Costello said that comments from Woodstock residents would have the weight of Saugerties residents’ comments because the impacts would be a shared burden.

“I think the Planning Board will consider the concerns equally,” he said.

“I don’t believe there’s a need for them to be aggressive,” Costello said. “I think if they make the case for whatever concerns they may have, I’m confident our Planning Board will weigh those concerns equally and as considerately as those concerns on the Saugerties side. We certainly don’t want to be a bad neighbor.” 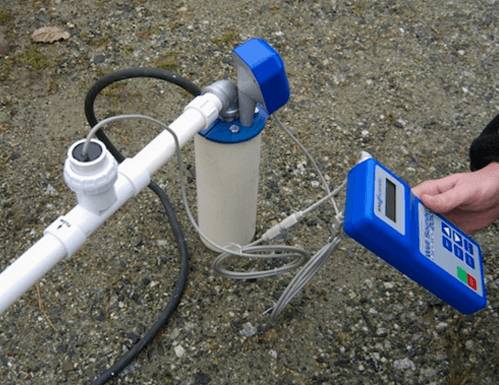 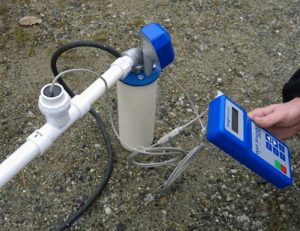 On Monday October 17th, Terramor started testing the first of three proposed wells on their site. They also started testing 4 or 5 wells on surrounding properties. Tests had originally been scheduled for 24 hours, but after input from a hydrologist (whose letter you can see below), the time span was expanded to 72 hours.

Terramor’s testing of neighbor wells is not required by any regulation of the state, Ulster County, or the Town of Saugerties. Results from these test will be shared with the NYSDOH, the Town, and the neighbors. Tests are done to find out in what ways the pumping of the Terramor wells might affect nearby wells. The technology used is “sonic water level meter” and readings are to be taken every two hours. As the hydrologist’s letter points out, this form of testing is sub-optimal. Thus, several neighbor well will also be monitored using a more precise transducer system, and readings take every five minutes. It is possible that the Planning Board ot the DOH may require further testing later.

Here is the copy of the letter sent by the hydrologist to KOA/Terramor and the Planning Board:
2022-10-04-Hydrologist-Letter-Terramor-Aquifer-Test-Recommendations

If you cannot see the embed above, here is a .pdf of the letter: 2022-10-04-Hydrologist-Letter-Terramor-Aquifer-Test-Recommendations

Members of the Planning Board,
I write with a note about one specific paragraph in the LA Group/Terramor August 1st response to NPV’s July 11th comments.
https://drive.google.com/file/d/1gttGf_uZuZyJn55QLDcL2RiI8IKfJ3eT/view?usp=sharing (OR: https://bit.ly/Terramor-response-to-NPV)

As part of the developers’ August 1st response to NPV comments they write:

f. (s) Nuisances. The proposed use shall not be more objectionable to nearby property owners or occupants by reason of noise, fumes, vibration or lighting than would be the operations of a permitted use.

With the provision of central water and sewer like the proposed facility, giving consideration to development constraints posed by the presence of wetlands and steeper slopes on the property, and considering that the original proposal for the South Peak subdivision on the property contained 43 single family homes, the Applicant estimates that the site appears capable of supporting approximately 50-60 single family homes. Each of these homes would have their own associated noise, fumes, vibration and lighting.

This paragraph is both artfully worded and elides historical facts:

1)The South Peak project was originally proposed as 41 lots (August 2004) – https://drive.google.com/file/d/1KLAkTYyd6_A09JoEB95BzSdtLLxd-txY/view?usp=sharing (OR https://bit.ly/South-Peak-original-41-lot-drawing)

2) The Conditional Final grant was for 23 lots (April 2007) https://drive.google.com/file/d/10g0QTKxRClLANjOgrLOZYZFFNOPlNwww/view?usp=sharing (OR https://bit.ly/South-Peak-Conditional-Final)

During this years-long process the Board repeatedly noted the extreme difficulty of the land, the UCDH granted permits for 18 septics (later increased to 22 by dint of redrawing lot lines), and there were countless other revisions along the way.

To now claim that “the site appears capable of supporting approximately 50-60 single family homes” is preposterous. I can imagine the Board laughing harder at this claim than they did when first Mr. Rothe proposed 41 lots back in 2004. Building techniques may well have improved, but not that much. Indeed, our standards for roads, wells, septics and the like have probably gotten tighter over the years, making the 50 to 60 figure even sillier.

While I am confident that members of the Board with long memories will have picked up on the ridiculousness of this particular LA Group/Terramor claim, I wanted to bring special attention to it. Board members will have to decide for themselves to what extent this puffery speaks to the credibility of other LA Group/Terramor responses to the NPV comments.

Thanks for your efforts and for your time.

Mark Pisani
— letter ends —
Here is a .pdf of the letter: A note about one particular claim from the developers’ response to NPV comments – With history and links

There were no other submissions in the public file as of October 17th, 2022. Terramor did not come up at the October 18th Planning Board meeting.

Added a simple page to the site with instructions on how to write a letter about the Terramor Catskills Development.