Where does Terramor’s proposed facility fit within the definition in 235-11-1? Is it a Lodge? Camp? Recreational Park?

Early in the planning process for Terramor, and pursuant to a question about the ways in which Saugerties zoning might affect the Terramor development, Alvah Weeks, the Saugerties Building Inspector and Zoning Administrator, wrote to the developers’ designers and clarified the situation as he saw it then.

This memo is dated June 6 2022 and includes a brief discussion of the AutoCamp project and the ways in which it was affected by the “pre-existing business” aspects of the zoning laws. It also discusses the particular terms about “camps” and determines that the project as proposed fitted in to the category of “Camps and Recreational Vehicle Parks”. The memo then cites parts of the zoning determined to apply here.

Here is a gallery of the Determination Memo to Terramor from Saugerties Building Inspector / Zoning Administrator: 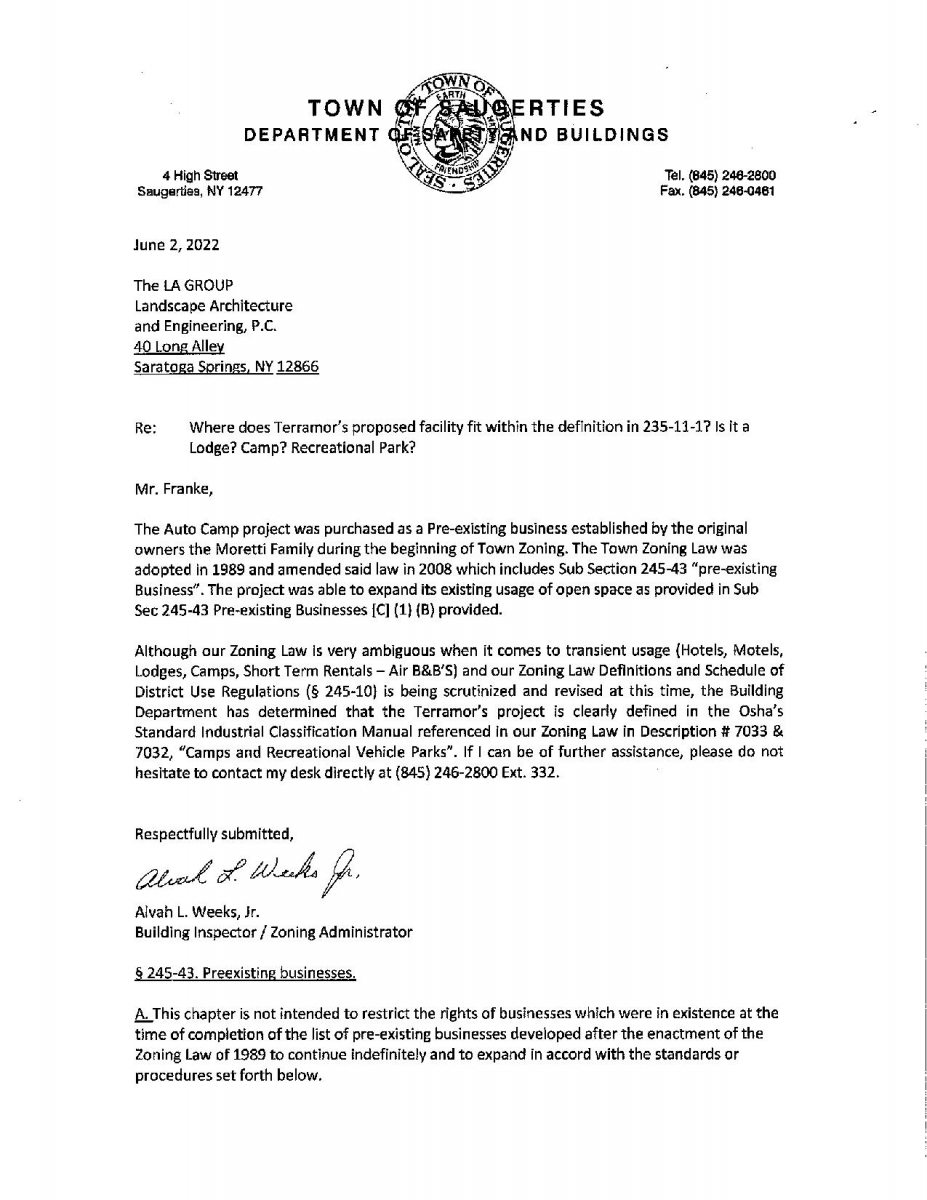 
Here are pictures of the Determination Memo to Terramor from Saugerties Building Inspector / Zoning Administrator:


Here is the text of the Determination Memo to Terramor from Saugerties Building Inspector / Zoning Administrator Alvah Weeks.  The formatting may be off and we include the text here mainly for search reasons.
— starts —

Re:  Where does Terramor’s proposed facility fit within the definition in 235-11-1? Is it a Lodge? Camp? Recreational Park?

Although our Zoning Law is very ambiguous when it comes to transient usage (Hotels, Motels, Lodges, Camps, Short Term Rentals – Air B&B’S) and our Zoning Law Definitions and Schedule of District Use Regulations ($ 245-10) is being scrutinized and revised at this time, the Building Department has determined that the Terramor’s project is clearly defined in the Osha’s Standard Industrial Classification Manual referenced in our Zoning Law in Description # 7033 & 7032, “Camps and Recreational Vehicle Parks”. If I can be of further assistance, please do not hesitate to contact my desk directly at (845) 246-2800 Ext. 332.

A. This chapter is not intended to restrict the rights of businesses which were in existence at the time of completion of the list of pre-existing businesses developed after the enactment of the Zoning Law of 1989 to continue indefinitely and to expand in accord with the standards or procedures set forth below.

B. Expansion of pre-existing business. Any expansion of an existing building, erection of a new building, or increase of the lot area used by a pre existing business, as permitted within this section, shall be subject to the bulk and area standards of the most restrictive district in which the business is permitted by right in the use schedule. 2) In the event a use is only permitted subject to a special use permit, the standards of the most restrictive district in which such a permit applies shall be used. The new or expanded areas shall also comply with the parking and loading standards established for the use.

Description for 7011: Hotels and Motels

7032 Sporting and Recreational Camps Establishments primarily engaged in operating sporting and recreational camps, such as boys‘ and girls’ camps, and fishing and hunting camps. Establishments primarily engaged in operating sports instructional camps, such as baseball, basketball, football, or karate camps, and those operating day camps are classified in Industry 7999.